One Easter weekend a couple of years ago there appeared a news story that might be of significance to those interested in Immigration Law, as well as those interested in Evidence Law. The story came out of New York State and may hold object lessons for federal immigration officers and immigrants seeking to obtain their green cards. The story involved an immigration officer who was recorded demanding sex from a young woman from abroad in exchange for him awarding her a green card.

Those who know a bit about immigration law understand that one of the quickest ways for an alien to gain Legal Permanent Resident status in the U.S., that is, to obtain a “green card,” is to marry an American citizen. Under this procedure the alien becomes what is known as an “immediate relative” and does not have to wait for an immigrant visa to become available – a process that sometimes might take several years. Those who know a bit about evidence law understand that in a criminal or civil proceeding a statement is not hearsay if it is a statement offered against another party and it is that party’s own statement. This is known as an “admission.” Since it is not hearsay such “admission” would be admissible at trial against the one who made it.

Got it? Of course you do. Now consider this.

On a Good Friday in March of that past year, an adjudication officer at the U.S. Immigration Service office in the state of New York was arrested on corruption charges. He had threatened to hold up an unnamed woman’s green card application and had even threatened to deport her relatives if she did not have sex with him.

The woman, who was married to an American citizen, admitted that she had given in to the officer’s initial demand for sex because she was afraid of his threats. But she was smart! She used her cell phone, hidden in her purse, to record the sexual encounter and the conversation that preceded it. She was then even smarter. Days after the encounter she went to the New York Times with the cell phone recording to tell her story. Next she notified the New York District Attorney regarding the matter. The officer was arrested and suspended from his job. More than likely the case was turned over to the Feds for prosecution. A trial in this type of case would be unlikely. The case would be ripe for a quick plea bargain and a quicker guilty plea, in light of the taped sexual encounter and his threats that could be used against him at trial as admissions.

We really do not know the outcome of this particular case, but experience with the criminal justice system provides insight into the usual course for this type of case. The officer would probably have been allowed to plead guilty to attempted extortion and abuse of his position and at sentencing receive a 14 month sentence at a minimum security federal correctional institution. He would, also, of course, lose his job as an immigration officer. The woman married to an American would more than likely have been granted her green card and become a legal permanent resident of the United States.

In real life these types of cases only occur now and then. In this case the immigration officer was not too smart. As they say on the street — he literally “tripped” on his own manhood! During his probable sentence of a 14 month trip to a minimum security federal correctional institution the officer would not be locked up in a single cell, instead he would be in a dormitory setting or “pod” which would have a large gathering space for the inmates known as the “day room.” Each day he would be incarcerated he could, perhaps, ” trip” off to the prison’s day room and do penance for that “trip” that sent him there. Many would have done so before him. 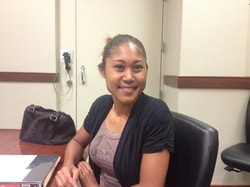